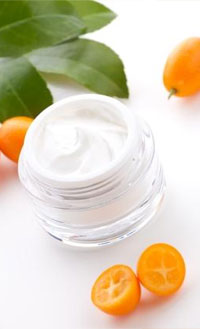 Carnauba wax can produce a glossy finish and as such is used in automobile waxes, shoe polishes, dental floss, food products such as sweets, instrument polishes, and floor and furniture waxes and polishes, especially when mixed with beeswax and with turpentine. Use for paper coatings is the most common application in the United States. It was commonly used in its purest form as a coating on speedboat hulls in the early 1960s to enhance speed and aid in handling in salt water environments. It is also the main ingredient in surfboard wax, combined with coconut oil.
Because of its hypoallergenic and emollient properties as well as its shine, carnauba wax appears as an ingredient in many cosmetics formulas where it is used to thicken lipstick, eyeliner, mascara, eye shadow, foundation, deodorant, various skin care preparations, sun care preparations, etc.[citation needed] It is also used to make cutler's resin.
It is the finish of choice for most briar tobacco or smoking pipes. It produces a high gloss finish when buffed on to wood. This finish dulls with time rather than flaking off (as is the case with most other finishes used).
Although too brittle to be used by itself, carnauba wax is often combined with other waxes (principally beeswax) to treat and waterproof many leather products where it provides a high-gloss finish and increases leather's hardness and durability.
It is also used in the pharmaceutical industry as a tablet-coating agent. Adding the carnauba wax aids in the swallowing of tablets for patients. A very small amount (less than a hundredth of one percent by weight, i.e., 30 grams for a 300 kg batch) is sprinkled onto a batch of tablets after they have been sprayed and dried. The wax and tablets are then tumbled together for a few minutes before being discharged from the tablet-coating machine.
In 1890, Charles Tainter patented the use of carnauba wax on phonograph cylinders as a replacement for a mixture of paraffin and beeswax.
Carnauba wax may be used as a mold release agent for manufacture of fibre-reinforced plastics. An aerosol mold release agent is formed by dissolving carnauba wax in a solvent. Unlike silicone or PTFE, carnauba is suitable for use with liquid epoxy, epoxy molding compounds (EMC), and some other plastic types and generally enhances their properties. Carnauba wax is not very soluble in chlorinated or aromatic hydrocarbons. Microcrystaline Wax
Microcrystalline wax is often used in industries such as the tire and rubber, candles, adhesives, corrugated board, cosmetics, castings, and a host of others. Refineries may also utilize blending facilities to combine paraffin and microcrystalline waxes. This type of activity is prevalent especially for industries such as tire and rubber.
Microcrystalline waxes have considerable application in the custom making of jewelry and small sculptures. Different formulations produce waxes from those soft enough to be molded by hand to those hard enough to be carved with rotary tools. The melted wax can be cast to make multiple copies that are further carved with details. Jewelry suppliers sell wax molded into the basic forms of rings as well as details that can be heat welded together and tubes and sheets for cutting and building the wax models. Rings may be attached to a wax "tree" so many can be cast in one pouring.
MORE INFORMATION Carnauba wax
Carnauba also called Brazil wax and palm wax, is a wax of the leaves of the palm Copernicia prunifera ( Synonym : Copernicia cerifera ), a plant native to and grown only in the northeastern Brazilian states of Piauí, Ceará, and Rio Grande do Norte. It is known as " queen of waxes " and in its pure state, usually comes in the form of hard yellow-brown flakes. It is Obtained from the leaves of the carnauba palm by collecting and drying them, beating them to Loosen the wax, then refining and bleaching the wax.
MORE INFORMATION
Loading Now
Please Wait